Election Day 2017 -( The General Election, not the local school councillor, although that would probably be more worthwhile...is this title too long?)

The polls are about to close on the 2017 clusterfuck General Election (they will certainly be closed by the time that you read this) so now is a good time to make my brief analyse of the campaigns and make my predictions.

First, as I have already stated, this is a clusterfuck of an election. Called by Theresa "strong and stable" May when she thought she had a pretty much record breaking lead in the polls. She thought she could guarantee herself a full five year term, and kill of the revival of left Labour before it began. The Brexit sabotage excuse was just that, and excuse. Labour supported article 50, and the only way they were going to obstruct Brexit is if the negotiations were absurdly bad for the British. What followed was the biggest clusterfuck of a campaign in modern political history. A leader who wouldn't answer any questions and a party that was ill-prepared were the highlights of the Tory campaign. At least as far as the Tories were concerned at least.

Suffice it to say, the Tory campaign was awful.

I have very little satirical to say about the Labour campaign, which I feel has been pretty good. It doesn't seem sporting to join the mockery of Diane Abbott, a woman who may be incompetent but has done very well for herself. The biggest stumbling block for Labour is that Jeremy Corbyn doesn't seem too keen on instigating a global apocalypse by launching a first strike. And to be fair, I am with him. Russia have missiles that would destroy the entire tiny island of the UK in one strike. Launching our outdated pea-shooters would be a total clusterfuck of an idea. Russia is a  landmass that we could use our entire nuclear arsenal at without hitting a single person. David vs Goliath is all well and good, but when Goliath is that big you can't even see the fucker it is probably best to keep your head down and shuffle on.

So now is time for me to make my projections.

The Tories will win.

Probably with an increased majority. To be specific, I expect an increase for the Tories of about 20 seats, to a total of around 350 seats. A ridiculous result when you consider their campaign, but it is inevitable that 2 years of blind support from the mainstream media will have a significant effect on the result. But more on that when I can be arsed to write it.
Posted by Unknown at 14:32 No comments:

I have decided to resurrect this blog and dedicate it entirely to political content. The reason why is simple, politics is the most important thing I ever feel inclined to write about. Of course, there could be other disciplines that intrude, but the central theme will always be politics.

There will be a mix of original content and links to other platforms that I write on.

With that in mind, please accept this link to a short article that I wrote on hubpages, exploring why reactionary hate is the victory that Islamic terrorists want.

Hegemony in Adverts (and the wider media)

The people who have witness my infrequent visits to the blogosphere may be aware of my interest in political communication and more specifically how communication aids power.

Below is a link to a short article I wrote exploring the Gramscian concept of Cultural Hegemony and how this is revealed through the use of stereotypes in adverts.

I hope you enjoy
Posted by Unknown at 09:45 No comments:

,,,then read my new article on dystopian literature, listing 10 very, very different  dystopian novels that all avid readers should read before they die (although one is only in there due to sheer popular pressure...see if you can guess which one it is).

Hope you enjoy the read and please remember to comment on the bottom of the article with your favourite dystopian literature.
Posted by Unknown at 07:37 No comments:

New flash fiction for you

I recently posted a new flash fiction on my main writing site. Follow the link below to read the flash fiction and a few words about my process and reasons for writing the story.

I hope you enjoy the story. Please feel free to comment either here or at the bottom of the story to let me know what you think.

Thanks for reading, and I hope you enjoy.
Posted by Unknown at 14:25 No comments:

Ian Bone - anarchist and former most dangerous man in Britain - was arrested last night at the latest "poor doors" protest outside One Commercial Place after the police decided that the growing campaign needed to be checked.

At the event Class War anarchists were joined by the Womens Death Brigage, unionists, the E15 mums and others sick and tired of the social apartheid taking part in London and across the globe.

Given the growing numbers at the weekly event (every Wedneday at 5.30pm) the police obviously decided to try to deter the protestors by arresting one old man with a walking stick - using a full riot van full of TSG officers to do so. They obviously don't bother reading their files, otherwise they would know that this kind of behaviour will only act as encouragement to Ian and his Class War supporters. We are obviously doing something right!!!
Posted by Unknown at 08:54 No comments:

Apartheid In The UK 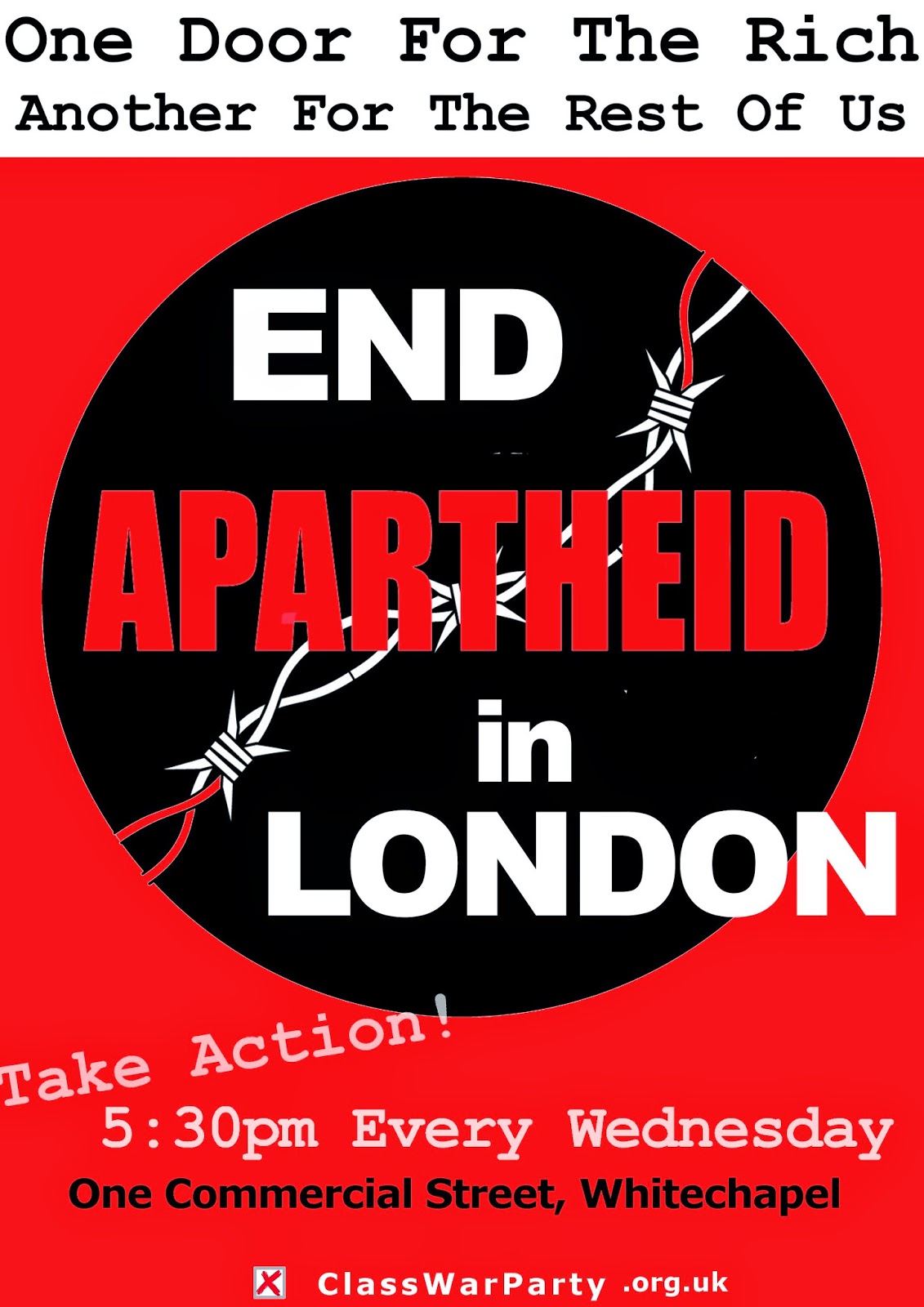 It seems strange to be talking about apartheid occurring in modern Britain but the growing trend to segregate the rich and poor is exactly that.

Apartheid was first used to highlight the rather disgusting practices of racial segregation in South Africa in the period after World War 2, but the usage of the term has grown to include "Segregation on grounds other than race" (quote taken from the oxford dictionary). While the formal practice of apartheid has now ended in South Africa (although the social effects are still being felt and will be for many years to come) Britain has started to use apartheid tactics to separate the rich and poor.

Developments such as One Commercial Street in London (the address itself is an advert of what the British elite see as important) where the wealthy tenants get to enter by the front door and the poorer residents in the apartment block have to enter by a back door and use different bicycle racks etc... are nothing more than an attempt to separate the rich and the poor, people who for the most part are only different due to the fortunes of birth, and treat the poor as a subclass.

Similar apartment blocks have recently caused uproar across the pond in New York and it seems that the rich have finally found a symbol of their wealth which causes outrage amongst the 99% - the people who have to use the poor door.

To show their disgust at this practice and to display solidarity with the majority of people who are not rich enough to use the front door, the Class War Party will be holding a weekly protest at 5.30pm every Wednesday outside One Commercial Street. Anybody in London is welcome to show their disgust at this example of modern apartheid.
Posted by Unknown at 04:19 No comments: